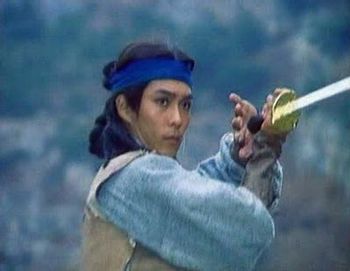 The story is based on a Korean novel

Hong Kil Dong and his mother spend years living with the old monk, who takes Kil Dong under his wing and teaches him how to be a warrior and martial arts expert. One day a grown-up Kil Dong encounters the same bandits, defeats them, and liberates their prisoner, the lovely Rim Yon Hwa. Yon Hwa's father is another lord in service of the king, so Kil Dong goes back home to claim her in marriage—but Lord Rim won't consent because Kil Dong is the son of a concubine.

Kil Dong's stepmother is still around, and she still wants him dead. And then the murderous Japanese ninjas show up.

Hong Kil Dong is the first North Korean martial arts movie. It is also unusual for its relative lack and hidden criticism of Communist/regime propaganda and policies (specifically the songbun policy), although the propaganda message is still there, and the Japanese are the bad guys as usual.