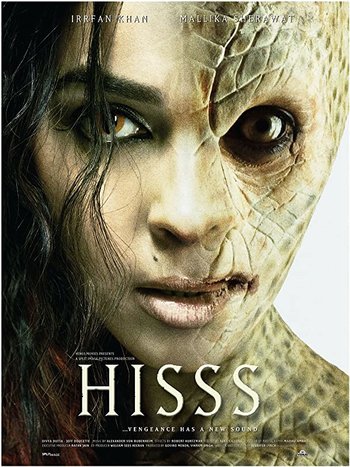 Hisss, aka Nagin: The Snake Woman is a 2010 adventure-horror Bollywood film directed by Jennifer Chambers Lynch based on the Far Eastern myth of the snake woman who is able to take on human form. It has attracted wildly divergent reviews and critical opinions.

George States (Jeff Doucette), is a wealthy American man with only a few months left to live as a result of encroaching brain cancer comes to India with a plan: to capture one of a pair of Naga, magical shapeshifting cobras so that he can force the spouse left behind to give him the Naagmani, the magical jewel these serpents guard which can be used to grant him Immortality.

He succeeds in his plans and captures a Naga male, causing its Nagini bride (Played by Mallika Sherawat) to come in search of her mate, going on a rampage against all the evil-doers who fall in her path and comes to the rescue of the exploited and abused women she comes across. Chasing her scaly and venom-littered trail is a police inspector Vikram Gupta (Irrfan Khan) who doesn't know whether to believe in science or mythology.