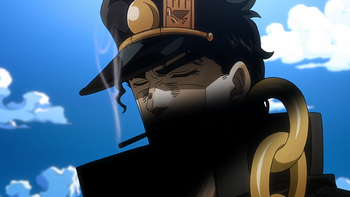 Thanks to that conveniently cast shadow, there's no possible way to tell what's in Jotaro's mouth. Is it a lollypop? A straw?
"I told her she would remain a beautiful silhouette against the warm light coming in through the curtains."
— David Lynch on how he convinced Laura Harring to do the nude scene in Mulholland Dr.
Advertisement:

A character (male or female) is full-on naked, but the artist doesn't want to reveal all. Yet an outright Censor Box will be just horrible (unless this was a comedy). This is a dilemma. What to do? Eureka! Just add some crafty shading and voila! A convenient shadow! Now we can keep those private parts, well, private.

The shadow can be worked to fit in the scene naturally, or just inexplicably be there on a bright sunny day.

Not only used for nudity, it's often used as a result of Executive Meddling last-minute censorship of something gory, causing a random dark slash covering half the screen and the Gorn behind it. Almost like a Gory Discretion Shot, only a bit sloppy.