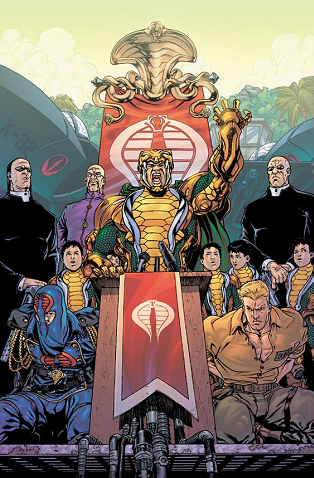 Just once, we'd like to see an evil terrorist organization with a fluffy hamster motif.
"Reptiles are abhorrent because of their cold body, pale color, cartilaginous skeleton, filthy skin, fierce aspect, calculating eye, offensive smell, harsh voice, squalid habitation, and terrible venom; wherefore their Creator has not exerted his powers to make many of them."
— Carl von Linné; a.k.a. Carl Linnaeus, also the epigraph of the Jurassic Park book
Advertisement:

Reptiles Are Abhorrent refers to the association between reptiles and villainy. This trope manifests itself in several basic ways. The simplest is to have reptiles that are consistently villainous. In animal stories, villains might be anthropomorphic versions of Real Life reptiles, while the heroes are cute mammals and birds.note We now know that birds are reptiles too. In Speculative Fiction, they might be fantastic beings such as Lizard Folk and Snake People.

Even when the bad guys are not actual reptiles, they may have some sort of reptilian theme. Perhaps they are an Animal-Themed Superbeing with reptile-related powers. The villain might have reptilian pets and/or exhibit a special empathy with reptiles. They may even be able to turn into giant snakes. Even if they have no special powers related to reptiles, they might use reptile related Animal Motifs and/or Theme Naming. The trope even turns up, if only by metaphor, in non-fiction; saying that someone is a "snake," "lizard," or "cold blooded" is enough to get across that you're dealing with a nasty character. And any character named "Snake", "Cobra", or "Viper" is generally a villain, a hardened criminal or at the very least a particularly cynical Anti-Hero.

This trope is not applied with equal frequency and intensity to all reptiles. Snakes (especially venomous ones) and crocodilians tend to be the reptiles most associated with villains. Meanwhile, turtles and certain small, cute lizards like geckos, chameleons, frilled lizards and the like are seen as cute and harmless, and are less likely to be considered evil, while large lizards like monitors and gila monsters are basically snakes with legs. Stereotypically reptilian features such as fangs, claws, tails, visible scales, and slit pupils may distinguish villainous reptiles from friendly ones, as does the use of venom. Also, while this trope primarily applies to real-life reptiles or characters based on them, it can also factor into how your dragons are different. Indeed, the classic European dragon: The grotesque, poisonous, fire-spewing, maiden-abducting beast of Medieval lore might well be the ultimate incarnation of this trope.

Despite the trope's name, it also applies to amphibians. Toads, in particular, have become heavily correlated with evil and unpleasantness due to their poisonous secretions, association with witches, and the myth that touching one will give you warts. Salamanders are also often depicted negatively. However, there are many favorable depictions of frogs in fiction.

This is not a character trope. It is a pattern only visible when looking at an entire cast of characters. Merely having a few bad reptiles among a majority of good reptiles does not invoke this trope. When the only reptilian character in a work or the majority of the reptile-themed characters are bad guys, this trope is in play. This trope does not require that reptiles be Always Chaotic Evil — there may be a few token good reptilians within a race of mostly evil reptiles as an example of My Species Doth Protest Too Much.

Sometimes the trope in invoked in-universe. Characters may assume that reptiles are more likely to be evil, whether or not it's justified. In these cases you may have Reptiles Are Abhorrent crossed with Fantastic Racism (see Animal Stereotypes).

If the expectation of reptiles being evil is set up and then overturned by the majority of such characters, the trope is being subverted. See PlayingWith.Reptiles Are Abhorrent.

Reptiles Are Abhorrent is fairly common, but it's far from omnipresent, so do not list aversions. Also, remember that for it to be a subversion, the audience must be set up to expect it before it is shown not to be the case. There are enough non-abhorrent reptiles in fiction that it would be a waste of time and space to list them all. Also, this is a Super-Trope of Snakes Are Sinister, Never Smile at a Crocodile, and Malicious Monitor Lizard, so examples specific to snakes, crocodilians, or monitor lizards should go to their respective sub-trope and not here.