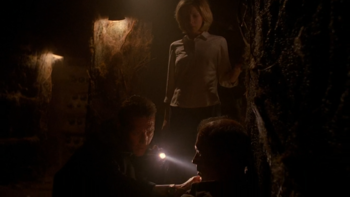 "It means no one gets there alone."
Written and directed by Frank Spotnitz
Doggett: This is not a man. I fell through some kind of trap. I guess that someone put that there to provide live meals for this thing.
Harrison: You're not saying that includes us?
Doggett: I don't intend to wait around to find out.
Advertisement:

With Mulder fired and Scully on maternity leave, Doggett is assigned a new partner, Agent Leyla Harrison (Jolie Jenkins), to carry out work on the X-Files. They quickly get in over their heads when they're trapped underground by a carnivorous reptile monster.