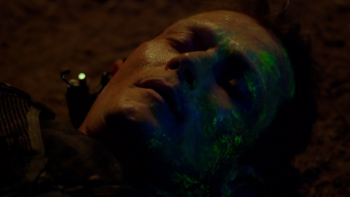 "This is an image taken from a stereo microscope of what's called a medusa."
Written by Frank Spotnitz
Directed by Richard Compton
"You've got a dead man who's got over one third of his body tissue completely eaten away, and until we figure out how and why, that tunnel cannot be reopened."
— Dana Scully
Advertisement:

Doggett investigates mysterious deaths in the Boston subway while Scully tries to persuade the transport authorities not to let the passengers back in before the danger is resolved.

"These guys were just doing their job - keeping the trains running."