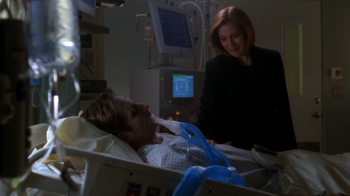 "We all have a life in our hands. I have yours... you have Mulder's... and Scully has her unborn child. It's who's willing to sacrifice."
Written by Chris Carter & Frank Spotnitz
Directed by Tony Wharmby
"It's so improbable... and I would have said impossible before this. The clinical fact he's alive when effectively this man, his tissue and I presume his neural and vascular systems are all in a state of decomposition."
— Dr. Lim
Advertisement:

Three months after Mulder's death, the body of Billy Miles, a man abducted at the same time as Mulder, is found in the ocean. Just as he's about to be autopsied, he seemingly comes back from the dead - turns out, he was never really dead, his vitals were just slowed to virtually undetectable levels. This leads Skinner to believe Mulder may also still be alive.