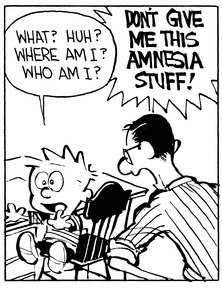 Dad isn't fooled...
Mrs. Burns: Right, what's this about losing your memory?
Bertie: Um ... yes. It just seems to keep um ... going.
Mrs. Burns: Really? So you don't remember Angela's invitation?
Bertie: What invitation?
Mrs. Burns: That's a pity, because there's a film you wanted to see at the weekend. I expect you've forgotten that too?
Bertie: Pirates of Blood Island!
Mrs. Burns: Ah, so your memory is working!
Bertie: I ... um ... remember some things. But other things I forget.
— Dirty Bertie, "Worms"
Advertisement:

When a character pretends to suffer from amnesia, or some other kind of memory loss.

The motivation for doing this varies: someone who has recently acted like a jackass or gone through an embarrassing situation may simply not want to relive it with others. A victim of Mind Control may seek an excuse to not talk about any pain they may have caused friends and family. A more nefarious character may fake memory loss to remove suspicion from themselves for a crime they committed, or to refrain from divulging sensitive information to their enemies.

The amount of memory a character may claim to have lost can range from just a few days, months, or even entire lifetimes. This can often depend on how vital it is to keep quiet about the incidents in question.

Faking amnesia is usually more believable to others when the individual has recently gone through some kind of trauma, like a blow to the head or Demonic Possession. A suspicious character may attempt to trick the faux amnesiac into mentioning something about the events to prove that they remember it after all. If the faker accidentally slips up and gives themselves away, they may make a big show about their "miraculous recovery." A character who really had amnesia at some point may recover but keep it secret and feign to still have amnesia, to take advantage of it (for example, because Amnesiacs are Innocent).

This can sometimes overlap with Fake Defector, if the character is faking memory loss for the sake of temporarily joining their enemies.

A sub trope of Obfuscating Disability. Compare Memory Gambit, in which a character arranges to actually have their memories removed to further their plans. Not to be confused with Amnesiac Liar, in which an individual who truly has amnesia is fooled into believing a falsehood they told before acquiring the condition.