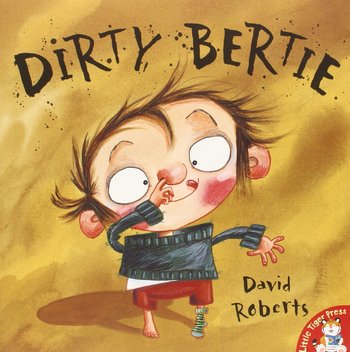 Dirty Bertie is a series of children's books by David Roberts.

The books focus on a seven-year-old boy who lives in London with his parents, his older sister Suzy, and his dog Whiffer.The boy's name is Bertie and he likes to do gross-out things like play with worms, pick his nose, and stuff like that, which disgusts other people.

His rivals include a snooty boy named Nicholas, also known as Know-All Nick, his teacher Miss Boot, a nosy girl next door who pretends to be his girlfriend named Angela Nicely, and a wealthy boy named Royston Rich.His friends are three of his classmates: Darren, Eugene, and Donna, the former two of whom are his best friends.

The first story was simply called "Dirty Bertie", whereas the others usually have one-word titles that end in an exclamation mark.