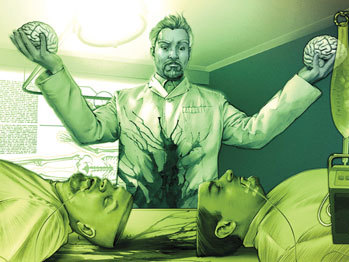 A mind is a terrible thing to cut-and-paste.
Kind of an older trope, now largely superseded by Brain Uploading. A Brain Transplant is what happens when a Mad Scientist saws open your skull, removes your brain, and puts it in someone else's body. The details, such as how the transplanted brain interfaces with the new body's nervous system, or how immune rejection is bypassed, tend to be Hand Waved. In Real Life we don't yet have the technology to connect a brain from one person to the spinal cord of another, so at best this would result in an "And I Must Scream" situation.
Advertisement:

Often involves a Brain in a Jar at some point. If successfully pulled off on two living people, a "Freaky Friday" Flip will result. Whole-body Organ Theft may also become a factor, if the donor body isn't yet deceased or brain-dead.