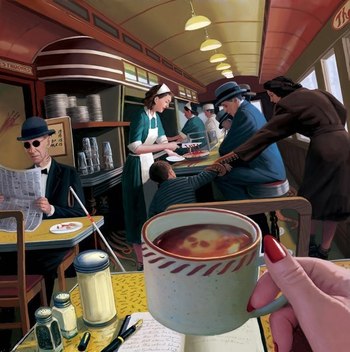 Nothing out of the ordinary...
Advertisement:

The usual horror tropes (fantastic monsters, ancient curses, Axe-Crazy maniacs, etc.) do not always work because this is too distant from what we may encounter in everyday life. Therefore some creators use the Mundane Horror.

The idea is to portray a seemingly comforting and everyday scene, but with some minor details which somehow "do not fit" and have very dark implications (i. e. that the character is really in a Dark World, or we're looking Through the Eyes of Madness, or it is all a Dying Dream).

A common way to do this is to take a normal scene then apply effects to it. For example, a group of children jumping rope is innocuous or even heartwarming in normal contexts. Slowing the footage down, making it black and white, desaturating the colour balance, blurring parts or all of it - or a combination thereof then altering the soundtrack so it's Creepy Children Singing an Ironic Nursery Rhyme instead of the normal lighthearted jumping cadence and you get a totally different effect from what is ostensibly the exact same scene.

Often features a Wham Line or a Wham Shot, and may overlap with Crapsaccharine World; Bread, Eggs, Milk, Squick; and Surprise Creepy. Can sometimes result in Fridge Horror if you don't immediately see the weirdness. A frequent result of A Glitch in the Matrix.

See also Uncanny Valley, when this trope is applied to characters rather than situations. Contrast Mundane Made Awesome. Compare and Contrast Faux Horrific.