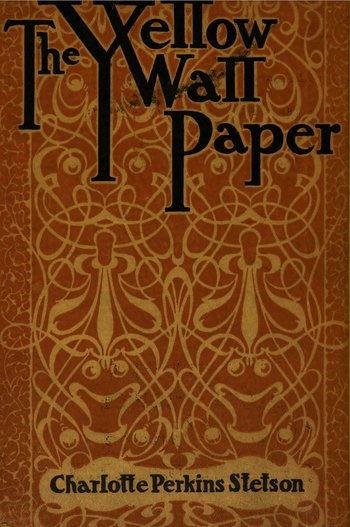 " is a semi-autobiographical short story written in 1891 by Charlotte Perkins Gilman. It takes the perspective of a young woman who has been ordered to continuous bedrest as a treatment for hysteria. Trapped in a small room in her husband's country house, with nothing to do all day but sleep and write in her journal, she starts to dwell upon the dingy yellow wallpaper that decorates the place. In her boredom, she begins to see a woman crouching, cowering, trapped in the walls...
Advertisement:

A landmark feminist work, its depiction of postpartum psychosis was also an inspiration for early cosmic horror, in particular The King in Yellow. Note

that H. P. Lovecraft may have named the Gilman family after her when writing The Shadow Over Innsmouth (and as a pun on "gill"). In 2011, a film version of the story was released. Read by Chilling Tales For Dark Nights here

. If that's not your speed, CGP Grey also did a reading of it here

The film adaptation adds examples of: