Literature / The King in Yellow 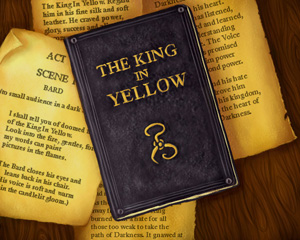 "Songs that the Hyades shall sing,
Where flap the tatters of the King,
Must die unheard in
Dim Carcosa."
—From Cassilda's Song in The King in Yellow, Act i, Scene 2
Advertisement:

The King in Yellow

is a rather surreal collection of short stories by Robert W. Chambers published in 1895. The stories are scattered all over the map between horror and romance, but all generally have ties to France as a setting, the later ones moving more and more into romance and increasingly starring artists. A common thread is a fictional play also called The King in Yellow, the reading of which either drives people mad or leads them to a dark fate.

Due to the publishing date, it's in the public domain in most countries and readable online.

H. P. Lovecraft cited this book as an influence, and it's the direct source of Hastur's namenote Chambers himself got it from a short story by Ambrose Bierce, "Haïta the Shepherd", in which it's just a shepherd's god. According to Lovecraft's friend and fellow writer August Derleth, the actual performance of The King in Yellow is a summoning ritual for an Eldritch Abomination.

Several authors have crafted facsimiles of the "real" text of Chambers' fictional play, including playwright Thom Ryng's 1999 version, which premiered at the Capitol Theater in Olympia WA and has seen two printings from Armitage press. A particularly notable version was written by James Blish for the story "More Light". In addition, the stories are the basis for The Yellow King Tabletop RPG by Robin Laws.

You might be looking for the Raymond Chandler short story of the same name (in which the lead refers to this book), or for the Dead Milkmen album of the same name. Also don't confuse with Yul Brynner, the King in Yellowface—though the real Thai monarchy, including Brynner's Historical Domain Character King Mongkut, is associated with the color yellow.

open/close all folders
Overall
The Repairer of Reputations
"Ne raillons pas les fous; leur folie dure plus longtemps que la nôtre.... Voilà toute la différence." note Do not mock the insane; their madness lasts longer than ours… that is the only difference.
The Mask
CAMILLA: You, sir, should unmask.
STRANGER: Indeed?
CASSILDA: Indeed it's time. We all have laid aside disguise but you.
STRANGER: I wear no mask.
CAMILLA: (Terrified, aside to Cassilda.) No mask? No mask!

The King in Yellow, Act I, Scene 2.
In the Court of the Dragon
"Oh, thou who burn'st in heart for those who burn
In Hell, whose fires thyself shall feed in turn;
How long be crying—'Mercy on them.' God!
Why, who art thou to teach and He to learn?"
The Yellow Sign
"Let the red dawn surmise
What we shall do,
When this blue starlight dies
And all is through."
The Demoiselle d'Ys
"Mais je croy que je
Suis descendu on puiz
Ténébreux onquel disoit
Heraclytus estre Vereté cachée."

"Je chante la nature,
Les étoiles du soir, les larmes du matin,
Les couchers de soleil à l'horizon lointain,
Le ciel qui parle au cœur d'existence future!"
The Street of the First Shell
"Be of Good Cheer, the Sullen Month will die,
And a young Moon requite us by and by:
Look how the Old one, meagre, bent, and wan
With age and Fast, is fainting from the sky."
The Street of Our Lady of the Fields
"Et tout les jours passés dans la tristesse
Nous sont comptés comme des jours heureux!"
Rue Barrée
"For let Philosopher and Doctor preach
Of what they will and what they will not,—each
Is but one link in an eternal chain
That none can slip nor break nor over-reach."

"Crimson nor yellow roses nor
The savour of the mounting sea
Are worth the perfume I adore
That clings to thee.
The languid-headed lilies tire,
The changeless waters weary me;
I ache with passionate desire
Of thine and thee.
There are but these things in the world—
Thy mouth of fire,
Thy breasts, thy hands, thy hair upcurled
And my desire."