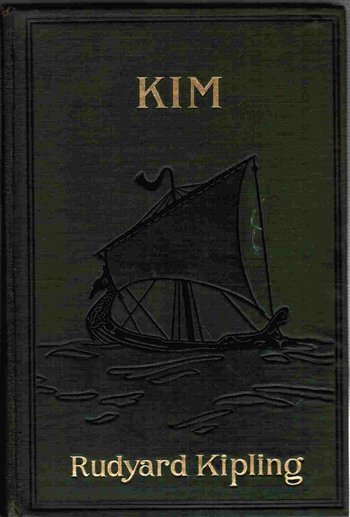 This is one of the most beloved works of Rudyard Kipling, published in 1901. The title character is a street urchin named Kimball O'Hara (called Kim throughout the novel), the orphan son of an Irish officer and his wife. Kim has been befriended by the Pathan horse trader and spy Mahbub Ali. He wanders around the streets of the city of Lahore happily, mingling with all the many races, and occasionally running secret errands for Mahbub. He meets Teshoo Lama (usually called the Lama) who is Walking the Earth seeking enlightenment. Kim follows him and has adventures over a long period leading all the way to the Himalayas, where he foils a Russian and a French agent. It is left with an open ending as Kim must decide whether to continue as the Lama's disciple or become a full time spy.

This novel is a formless one in plot, almost Picaresque, and depends primarily on character and setting which is not unknown for Rudyard Kipling (Kipling's greatest talent was arguably in setting rather than plot). It is one of the first spy novels ever told though it was in fact something of a Genre Buster because its focus went beyond espionage. Interestingly it captures the feel of Real Life espionage quite well. The actual nature of given missions is seldom revealed, nor is the identity of the enemy they are facing at a given time (with the exception of a Russian expedition in The Shangri-La at the end) and at first Kim doesn't even know who his own side is; which is of course what things would be like for a real spy. One of the book's strengths is its beautiful cross-section of life in British India.

In 1950 Kim had a well-received film adaptation directed by Victor Saville, starring Dean Stockwell as Kim and Errol Flynn (in his last great adventure movie) as Mahbub Ali.