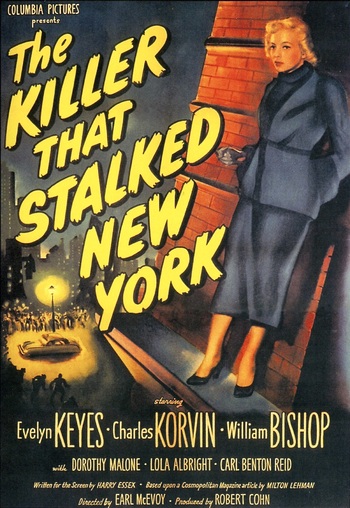 The Killer That Stalked New York is a 1950 Film Noir thriller directed by Earl McEvoy.

Sheila Bennet (Evelyn Keyes) is smuggling diamonds from Cuba to New York City on behalf of her husband, Matt Krane (Charles Korvin). Unbeknownst to either of them, Sheila also brought something else into New York: smallpox. Before long, there is an outbreak of the disease in the city. As public health officials try to contain the outbreak, Dr. Ben Wood (William Bishop) and a team of investigators look for the person who brought the disease to the city to keep them from spreading it to even more people even as the police search for the diamond smuggler, unaware that they are looking for the same person.

See also Panic in the Streets, another film from the same year about a disease outbreak in a US city, this time pneumonic plague in New Orleans.