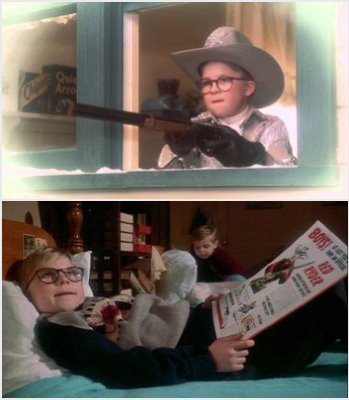 Okay, Ralphie. You win this time. But, we'll be back.
Elliot: J.D., be sensitive. Don't act like you're at a ping pong match between a ninja and Bigfoot...
[Dr. Kelso gives Elliot an odd look]
Elliot: I know that made no sense, but he's totally there now in his head. Look at his eyes.
[J.D.'s eyes dart back and forth]
Dr. Kelso: Look at that...
— Scrubs
Advertisement:

A brief cut to a Fantasy Sequence and back, usually no more than a few seconds long, and commonly bookended by a Fade to White. Alice yells at Bob, "What am I, your maid?!". Cut to Alice cleaning the house in a French Maid Outfit. Cut to Bob's face — he's clearly just imagined the role, and Alice has just slapped him to wake him up back to reality.

A very popular trope with commercials, so much so that it could almost be considered an advertising trope as much as it is a comedy trope, with the idea being to either convey how much one's life would be better with the product/service or how easily obtainable it is.

Contrast Daydream Surprise (and its subtrope Indulgent Fantasy Segue), where it's not clear from the start that this is only happening in a character's imagination. When other characters can see someone's Imagine Spot, that's Imagine Spotting. For other kinds of imagined sequences — i.e., if it's not just a brief, clearly marked cut — see Fantasy Sequence. And when it turns out not to be imagined, it's a Gilligan Cut. Can be combined with Tranquil Fury if the daydreamer is having a revenge fantasy to sublimate their rage at another person that they can't express in reality. May lead to Inner Thoughts, Outsider Puzzlement if the character spends too long caught in their imagination or starts Acting Out a Daydream.