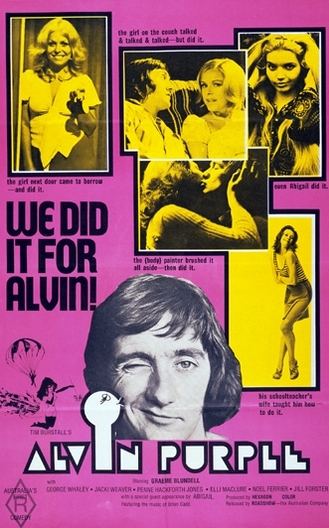 The film follows the misadventures of a naïve young Melbourne man named Alvin Purple (Blundell), whom women find irresistible. Working in door to door sales, Alvin unsuccessfully tries to resist legions of women who want him. By the film's halfway point, Alvin is so worn-out he seeks psychiatric help to solve his problems.

Upon its initial release, it received largely negative reviews from local film critics. Despite this it was a major hit with audiences, and became the most commercially successful Australian film released to that time, breaking the box office record set by Michael Powell's pioneering 1966 Anglo-Australian comedy feature They're a Weird Mob.

The film was followed by two sequels, Alvin Rides Again and Melvin, Son of Alvin, and an ABC series, all of which featured Blundell reprising his role as Alvin.