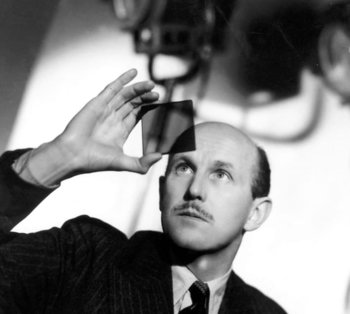 Michael Latham Powell (30 September 1905 – 19 February 1990) was an English film director, screenwriter, and producer who is probably best known for his work in collaboration with Emeric Pressburger. Known collectively as the Archers, Powell and Pressburger worked together from 1942 to 1957.

Powell's career began early. In the 1920s he worked with the legendary Rex Ingram (who'd directed Rudolph Valentino to stardom in The Four Horsemen of the Apocalypse) at his famous Nice studio. He later worked as a stills photographer on English films, including Alfred Hitchcock's Blackmail. The pair became friends and Powell was the one to suggest the climax in the British Museum, starting the trend of Hitchcock's films leaning towards Monumental Damage. note  Hitchcock in turn suggested actress Kim Hunter for A Matter of Life and Death. Powell worked in the film industry for several years as a director of quota quickies, which were the British equivalent of the B-Movie. His first real picture, as per his autobiography, is The Edge of the World (1937), an anthropological examination of a Scottish Island as it undergoes modernization.

His collaboration with Pressburger began in 1939 with The Spy in Black. Emeric Pressburger was a Hungarian Jew who had worked in the Weimar German film industry in Berlin (alongside Billy Wilder and Robert Siodmak) and fled the country when the Nazis came. He came to England, and together with Powell they formed a collaboration in the '40s, sharing a unique credit of Written, Produced and Directed by Michael Powell and Emeric Pressburger. In actual fact, Powell was the one who did most of the directing, interacting with the crew, working with the actors, deciding the distinct look of the Archers films, while Pressburger did the writing, producing and the editing. They had a complete rapport with each other and remained friends even after their amicable parting of ways; they would reunite for two later films, They're a Weird Mob (1966) and The Boy Who Turned Yellow (1972).

In between, Powell directed solo efforts. He collaborated with cryptographer Leo Marks on Peeping Tom (1960) and Age of Consent (1969). The critical reaction was so negative that it almost destroyed Powell's career. Over the next two decades, Powell (and Pressburger) fell into obscurity. Fortunately, Martin Scorsese and Francis Ford Coppola were fans and they worked to make Powell's films available to the general public. Many of his films are part of The Criterion Collection.

Powell's third (and last) wife was editor Thelma Schoonmaker (who has edited all of Scorsese's films since Raging Bull). In his final ten years, he became part of Scorsese's circle, serving as a friend and The Mentor, they recorded commentaries on the Criterion Laserdisc releases together of their films (later retained on DVD and Blu-ray releases). In his final years, he worked on his two part autobiography. The first part, A Life in Movies was published in his lifetime. The second part, Million Dollar Movie was published after his death. It remains one of the best books of its kind.

Among Powell's notable films are:

Some tropes relating to Powell's life and work: