I Didn't Mean to Turn You On 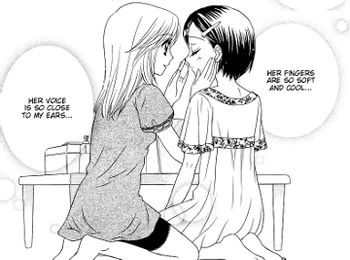 Alice has a huge crush on Bob. Now all of a sudden, it seems that everything Bob does or says lately comes with a free Double Entendre.

Alice always seems to be right behind him whenever he bends over to pick something up or having him around to help rearrange things in the garage always seems to bring them uncomfortably close together, which nowadays, is anything within five feet. And she's nearly forming puddles at her feet (from SWEAT, gutterbrain!) when he helps her with her backswing.

Alice would probably love to do nothing more than jump Bob right then and there, but she can't. She may already be married (and she doesn't want to cheat), or maybe Bob is, or maybe they've been Like Brother and Sister all their lives. Or it could just be that she's too shy to speak or act on her feelings, or she wants to take it slow and all this lust is speeding up things too fast for her, or they're in public, or maybe Bob's too young or old for her, or any combination of the above or more.

And the most infuriating thing is, Bob is totally unaware of these feelings he's stirring up inside of her. Or Bob may secretly feel the same way, but he has the same problems with self-expression. It takes a special talent for a Twice Shy couple to both be doing this to each other, but stranger things have happened.

For those around the Head-Turning Beauty or the Chick Magnet, this might be called "Tuesday."

Compare with Stupid Sexy Flanders, which is when this is happening to a character who doesn't want to be turned on. Headbutt Thermometer is usually a subcase of this. Imagined Innuendo may be the cause.

The trope title comes from Cherelle's 1984 R&B hit of the same name. Its video features a breakdancing King Kong. Covers of the song have been done by Robert Palmer and Mariah Carey.