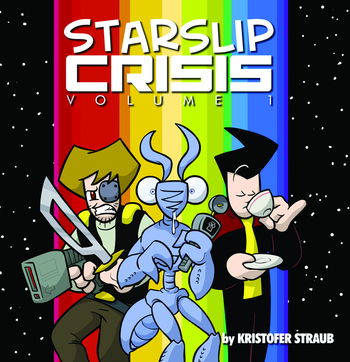 Set in the year 3440 on the Terran Directorate Ship Fuseli, formerly the Crimson Fall, a 'luxury battle cruiser' converted into a museum ship. Built so that the crew would get a morale boost of the opulence of the Fuseli, the caviar rations made the crew sluggish and easily overcome.

Was originally named "Starshift Crisis" until a potential copyright issue with the video game StarShift: The Zaran Legacy caused Straub to change it to "Starslip Crisis" in the "Overdrive" storyline. It was then named for the Starslip drive, the main form of FTL for the universe, which actually slips between parallel universes and is normally kept to a very close set of universes where you switch places with a copy of yourself in that universe. Because so many alternate universes use the drive the changes are so small as to be non-existent. Afterwards all mention of Starshift was changed to Starslip in not only the domain name, but the comic itself. And after "The End of The End" the comic was shortened to simply Starslip, and given an Art Shift to boot. The drive now works by moving the ship along two points on a straighter than straight line, with a wonderfully forced explanation for why this is still called a "starslip". (Incidentally, the retronym for the old tech? "Shift Drive".)

The strip began as a send-up of artistic and science fiction tropes, but incorporated longer and more complicated storylines—particularly after the Art Shift—while maintaining humor. It ended on June 15, 2012.

Main characters include Memnon Vanderbeam, the fussy, arrogant curator of the Fuseli; Cutter Edgewise, the drunk ex-pirate who is now Fuseli's pilot; Mr. Jinx, a cirbozoid, a stoic insectoid with Bizarre Alien Biology, whose race has repeatedly faced extermination at the hands of others; Meridian Holliday, chief engineer with a crush on Vanderbeam.