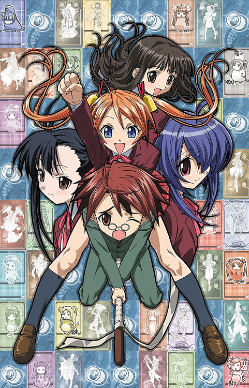 A Continuity Reboot of the Manga Negima! Magister Negi Magi (for some reason, considering the main manga was still running at the time) by Studio Shaft. This 26-episode series takes the basic premise and characters of the Manga, adds Deranged Animation and gags, removes almost all of the fanservicenote minus the OVAs, which had it all full force, transforming it into a Widget Series.

There is also a manga of the anime series called Negima!? neo (making it the manga of an anime of a manga), which keeps the same overall plot but removes a lot of the Deranged Animation and Widget Series elements and adds a few of the old series's elements back in.