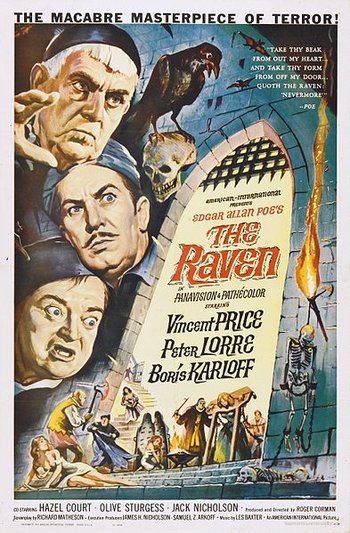 The Raven is a 1963 Horror Comedy film loosely based on the poem of the same name, written by Richard Matheson, directed by Roger Corman, and starring Vincent Price, Peter Lorre and Boris Karloff.

The fifth film in Corman's "Poe Cycle", it tells the story of 16th-century sorcerer Dr. Erasmus Craven (Price), who gets visited by the eponymous bird... who actually turns out to be another sorcerer, Dr. Adolphus Bedlo (Lorre), who was transformed into said bird by still another sorcerer, Dr. Scarabus (Karloff). After Craven restores Bedlo to himself, they — along with Craven's wife Lenore (Hazel Court), his daughter Estelle (Olive Sturgess), and Bedlo's son Rexford (Jack Nicholson) — go after Scarabus for revenge.

"The Macabre Masterpiece of Tropes!":