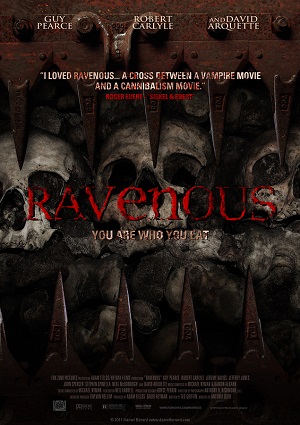 "It's lonely being a cannibal. Tough making friends."
Advertisement:

Captain Boyd is a Shell-Shocked Veteran of the Mexican-American War of the 1840s. As a Lieutenant going into his first battle, Boyd panicked when his unit was caught in a devastating ambush and rather than attempting to fight back or lead his men to safety, Boyd instead played dead in the hopes of saving his own life. When the Mexicans began collecting and burying the bodies from the battle Boyd found himself in a pile of bodies when, for no apparent reason, a powerful surge of strength and determination filled Boyd. This allowed him to break free, kill several enemy soldiers, and capture the nearby Mexican commanders.

At first the Army intends to present Boyd as a clever and ruthless hero, but it soon becomes obvious that despite his single brave action Boyd's nerves are shattered and he's incapable of presenting the heroic facade the Army wants. General Slauson responds by giving Boyd a reassignment to Fort Spencer, a ramshackle and barely manned fort near the Sierra Nevada mountains whose only purpose is to serve as a stopping point for pioneers traveling to California.

When Boyd arrives the fort proves to be populated mostly by drunks, misfits, layabouts, and crazies. Boyd is just settling into his life of quiet failure when a rambling loon by the name of Colqhoun stumbles up to the fort with a horror story: he was part of a party of six pioneers who found themselves trapped in a snowstorm as they tried to cross the mountains. When they ran out of rations, they ate the pack animals. When those were gone, they ate their leather clothing. When that was gone, one of the pioneers starved to death. But instead of burying the body they ate him. Before long they were hungry again, and found themselves looking at each other oddly...

Colqhoun tells them that when he left the remnant of the group, there were two others still alive, the wife of one of the pioneers and their treacherous guide, Ives, who had seemed to truly embrace cannibalism. The Colonel of the fort sets out with his ragtag soldiers to attempt a rescue, unaware of the terrors they'll find...

Not to be confused with the unrelated 2017 film of the same name.