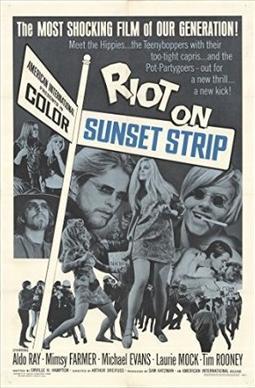 Riot on Sunset Strip is a 1967 film written by Orville H. Hampton, directed by Arthur Dreifuss, and produced by Sam Katzman.
Advertisement:

Businessmen on Sunset Strip object to the influx of hippies, who they say are damaging their businesses, resulting in the passage of a 10:00 PM curfew. Young people protest the curfew, which they want changed to 12:00. Walt Lorimer (Aldo Ray), the chief of police, considers himself the ally of the young people and tries to discourage violence, until his estranged teenage daughter Andy Dollier (Mimsy Farmer) gets mixed up in the scene.