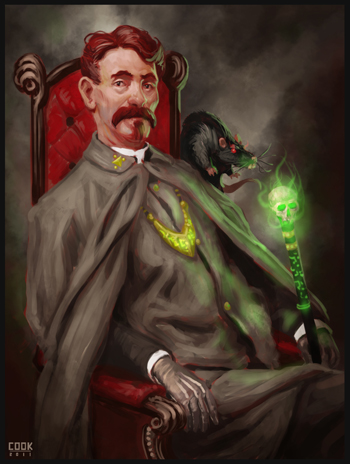 "Can a magician kill a man by magic?" Lord Wellington asked Strange.
Strange frowned. He seemed to dislike the question. "I suppose a magician might," he admitted, "but a gentleman never could."
— Jonathan Strange & Mr Norrell
Advertisement:

A staple in Gaslamp Fantasy and Fantasy Counterpart Cultures of a Victorian-esque society. The Gentleman Wizard is, essentially, an aristocratic blue blood who also happens to be some sort of magician, alchemist, wizard, or what have you.

If his magic is something which is passed down through blood, then it's possible he's part of a Magocracy, but he's definitely part of a Magical Society, probably with some interesting name that alludes to hermeticism or Greek Mythology. If his magic is learned however, then he tends to be close to a magical version of a Gentleman and a Scholar.

Either way, his status as a rich blue blood allows for him to get quite good at this magic stuff, since he probably has nothing better to do. Usually the skill to use magic is seen as an appropriate sort of job for a gentleman to have, similar to being a lawyer or banker. He'll also be a Sharp-Dressed Man, in dapper Victorian or Edwardian attire, possibly embellished to show off the fact that he's magical, and if he has a walking-stick it will no doubt be his wizard's staff or act as a magic focus at least once.

But even as a gentleman, such characters are usually considered to be quite strange and eccentric, even tricky and untrustworthy, no matter how polite their manner may appear to be. And as blue bloods, they might be quite proud and stuffy, looking down on the commoners and the muggles. If magic isn't particularly common then it's not unheard of for him to be The Hermit who lives in a Big Fancy House on a hill which he rarely comes out of, acting as something of an Urban Legend to the populace.

This was the original persona of Stage Magicians when they first appeared in that era. They have since relaxed as the rest of society has, and now a magician in a suit is seen as old hat (no pun intended). See also Magicians Are Wizards.

If he is British, he is most likely a Quintessential British Gentleman; if American, he might be a Southern Gentleman or Boston Brahmin. Compare Gentleman and a Scholar for the science equivalent (the two might dislike each other deeply, but you'd never be able to tell).