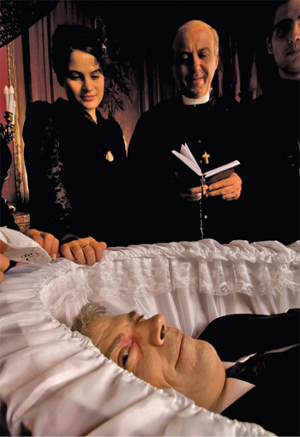 Shhh. Don't blow his cover!
Sevarius: I was particularly proud of my death scene.
Xanatos: Frankly, Sevarius, I thought you overplayed the part.
— Gargoyles

A character's death is faked, for one or more of the following purposes:

Often the audience will think the character is genuinely dead. Extra points if a fake crime scene photo or Staged Shooting is used. Sometimes a John Doe's remains are substituted and destroyed beyond recognition, or everyone is simply told "They Never Found the Body." The person faking his death might attend his own funeral. Of course, when this happens to main characters in a series, the audience should not be fooled.

When the method of faking temporarily turns the character into a realistic-seeming corpse, this is Faux Death.

Death Faked for You, Playing Possum, Disney Death, and Fake Kill Scare are subtropes. The inverse is Of Corpse He's Alive (a "live" person is actually dead) and El Cid Ploy (a faction pretending their leader is alive).

A play on the common turn of phrase "waking the dead". Contrast He's Just Hiding! Not to be confused with Fake Weakness. See also Reports of My Death Were Greatly Exaggerated.

For what (usually) happens next, see Starting a New Life.

Remember that faking the dead may seem fun, but it is a criminal act in most countries and may cause legal trouble. Don't Try This at Home.

BEWARE OF UNMARKED SPOILERS. You Have Been Warned.

It turns out "Gold Fever" didn't kill Scrooge. He came to his senses, got some rest and the family came up with a plan to expose Glomgold's cheap evil plan.

It turns out "Gold Fever" didn't kill Scrooge. He came to his senses, got some rest and the family came up with a plan to expose Glomgold's cheap evil plan.