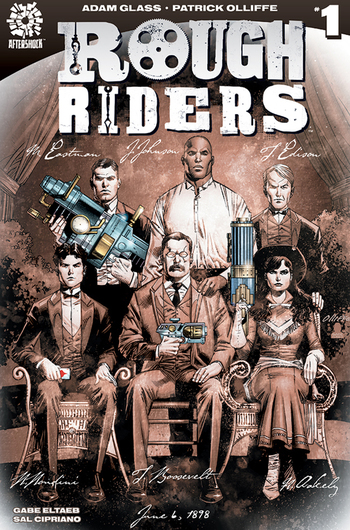 "The Big Stick"
"You've been looking for a war your whole life, Teddy. Here it is."
Advertisement:

The League of Extraordinary Gentlemen...IN AMERICA!

An Alternate History comicbook by Adam Glass and Pat Olliffe, Rough Riders follows the exploits of the eponymous group of press ganged adventures as they fight, scheme, and sacrifice to protect their nation, and eventually the world, as the shadow of a mad and macabre 20th Century looms. Said would-be Dream Team initially consists of:

As it stands, the series consists of three volumes detailing the history of this band of washed-out and up-and-coming American legends: the peace they lost, the wars they fought, and the fantastic legacy they left behind.

Tropes used in Rough Riders include: