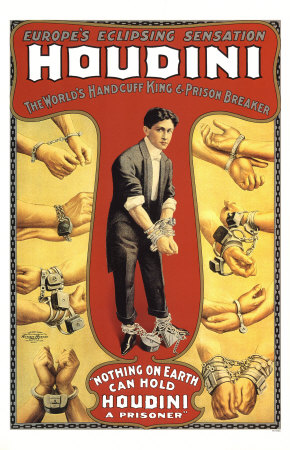 "Now you're looking for the secret... but you won't find it... because you're not really looking... You don't really want to know... You want to be fooled."
— Cutter, The Prestige
Advertisement:

Using their nimble fingers, hidden devices and deliberate misdirection, they can Pull a Rabbit out of My Hat, pull a dove from their sleeve, Saw a Woman in Half, and hypnotize hapless audience members or even make them disappear! Sometimes they're also Escape Artists, able to get out of handcuffs and straitjackets and still find out what your card was. Some of them solve crimes in their spare time. And maybe, just maybe, some of them can do real magic. Or, conversely, they simply use their stage tricks to fake it. A magician never tells, but then that's all part of the mystique.

Almost Always Male — at least, the person whose name is on the marquee. However, the assistants (almost Always Female) are also trained professionals. Woe betide anyone who tries to Rummage Fail through their possessions. A skilled one will usually perform tricks that are impossible in real life, which is handwaved by simply saying a magician never reveals his secret.

Of course, real illusionists usually don't fit any of the stereotypes listed above, but since the magic community is, by nature, sorta close-knit, this is far from being a Discredited Trope.

See the Hocus Tropus index for the many tropes surrounding Stage Magic.

Harry Three-Eye is a part of Hotel Transylvania's entertainment.

Harry Three-Eye is a part of Hotel Transylvania's entertainment.