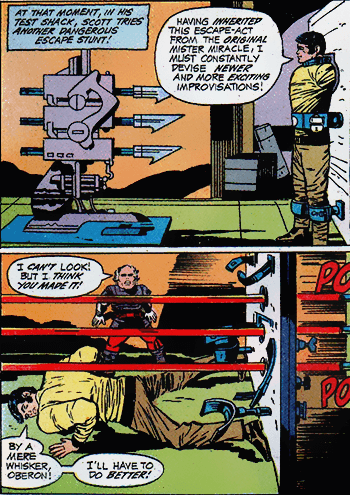 "I knew you'd escape! They haven't built a circuit that could hold you!"
— Yuri (to Tron), TRON
Advertisement:

Behold, the Escape Artist! Death-defying man of adventure! No bonds can hold him! No trap can kill him! With a smile and a wink, he slips out of the tightest straitjacket, breaks out of the most hermetic cage, rises unharmed from the deepest ocean!

The Escape Artist (or Escapologist) is exactly that: a character whose ability to escape dangerous situations is practically superhuman. However, do note that it's not ACTUALLY superhuman: a true escape artist relies merely on skill, guile, and misdirection to make his escapes. After all, breaking free with Super Strength, escaping death with Super Speed, or surviving with Nigh-Invulnerability, well, that would be cheating, and this character is ALL about doing things the right way.

Escapology, the art and science of escape (and not to be confused with Escapism, mind you), has long been associated with stage acts since the early days of the 20th century, with Harry Houdini being the man to elevate it into a bonafide art form. In Real Life, stage magicians perform acts of escapology relying on both illusionism and actual skills such as contortionism, lock-picking, and even plain brute strength. As a long-time tradition of stage acts, escape stunts are suitably dramatic and suspenseful, utilizing the apparent (or sometimes even actual) danger to keep the audience on the edge of their seats, and giving them rapturous release when he manages to escape.

As a character type in fiction, escapologists will ALWAYS escape on pure skill. Though they may use tools to free themselves, those tools still require intense training to use, as well as a high amount of cunning to conceal in case of being trapped. They are also always incredibly nimble and of cat-like dexterity. This lends itself to excelling in other talents, like gambling (especially for high stakes), gadgeteering, misdirection, etc. Also, the ability to escape usually goes hand-in-hand with the ability to infiltrate, and so escapologists can usually be found as the mastermind or a high profile member of a group performing The Caper. Furthermore, expect an escapologist to know kung-fu, for when guile and skill alone won't get him out of trouble.

Because of its association with the stage, escapist characters are also usually pretty hammy and melodramatic. They tend to be roguishly charming to boot. Basically, if a character's gimmick is escapology, he's gonna be larger than life. Escapology is, obviously, quite a universally useful skill, so you see both good and bad guys relying on it, but even bad guys tend to be pretty charming and charismatic if they're this kind of character. They will ALWAYS show confidence in their skill, to the point of sometimes bragging about it or even using it as a signature of their character. There is no such thing as a timid or subdued escapist since their ability to survive traps and bonds depends on being brave and confident of one's abilities. Even when an escapologist is actually a very serious character, he'll still tell you to your face that a trap won't work on him. For example, Batman, one of fiction's greatest escapologists, may be serious and not prone to bragging, but if you tie him up, he'll be the first to tell you "This won't hold me for long."

Not to be confused with the 2013 BBC TV series of the same name, although it does involve this trope in the legal sense. If someone is escaping from prison, they're a Prison Escape Artist.