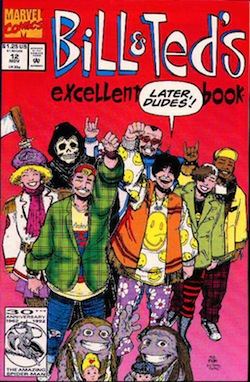 Bill & Ted's Excellent Comic Book was a Comic Book series in the Bill & Ted franchise, published by Marvel Comics. It began as a standard Comic-Book Adaptation of Bill and Ted's Bogus Journey, then was followed by the ongoing title, "Bill and Ted's Excellent Comic Book". The ongoing series was written and drawn by Evan Dorkin; it ran for twelve issues (December 1991 to November 1992) and was nominated for an Eisner Award.

The entire run (except for issue #8, which was not done by Evan Dorkin) was finally collected in two trade paperbacks by Slave Labor Press in 2005.