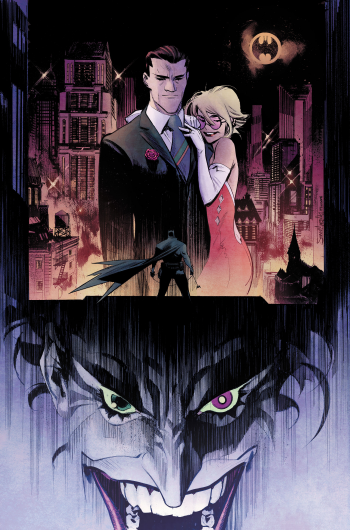 "Face it. The greatest villain in Gotham City is you!"
"I love Gotham, and it's time I paid her back for the debt owed by the Joker. The city deserves better than you, better than the Joker and better than the Dark Knight. So I'm going to be her White Knight."
— Jack Napier
Advertisement:

One day, when chasing The Joker throughout Gotham City, Batman takes his vigilantism a bit too far, having little regard for how much damage he causes as long as he catches the Clown Prince of Crime. The Joker ultimately lures him to an industrial building storing some mysterious pills, and convinces him to brutally shove the pills down his throat for all of Gotham to see, effectively curing the clown of his insanity. Once recovered, the former criminal, now known as Jack Napier, decides to take matters into his own hands and give Gotham the future they deserve — by becoming the city's White Knight.

Written and drawn by Sean Murphy, Batman: White Knight is a non-canon eight-issue miniseries running from October 2017 to May 2018, focusing on the redemption of Jack Napier and the struggles of the eponymous Dark Knight. It was later folded into the DC Black Label imprint with its first graphic novel printing.