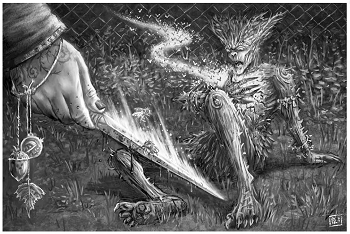 "All elves feel the shadow of iron, and to those who walk our higher paths, it is a bane that breaks the body and twists the mind."
— Etheliel, Battle for Wesnoth, The South Guard, "Into the Depths"
Advertisement:

One of the most commonly-seen Depleted Phlebotinum Shells and the traditional bane of The Fair Folk. Other supernatural creatures, such as werewolves and vampires, may also display a weakness to it. On occasion, this may also extend to elves.

Iron may be treated as naturally magic-disrupting or just poisonous for certain creatures. Sometimes it's supposed to suck the magic out of The Fair Folk (similar to the way it sucks heat out of the body), usually accompanied with screams about how "it burns". Sometimes it's got something to do with ferromagnetism, or related to iron's nuclear stability, or its resistance to rust.

Even when it doesn't actually harm anyone, iron may be portrayed as a magically inert substance that blocks, weakens or dampens magic, or that cannot itself be affected by it.

There's little agreement about what "cold" means in this context. Sometimes it just means that the iron, at the moment, isn't hot. Sometimes it's cold-worked iron, as opposed to hot-worked. Sometimes it's more complicated, like iron that has never been smelted, or iron that's been smelted in a magic way that doesn't involve any heat. Or it may also be a reference to the fact that heating magnets to a certain point causes them to lose their magnetism

, so "cold" iron is iron that still has its magnetic (magic) power.

Alternatively, it might just be a poetic reference to any iron (much as "cold steel" was used in later times), just because metals at room temperature feel cold thanks to heat conductivity. These instances are generally more faithful to the old folklore behind The Fair Folk, in which this trope comes up as as a particularly old form of "magic vs. technology" symbolism. The logic behind these mythos is that metallic iron, being a man-made substance never found in nature, is anathema to the nature-inclined Fae.

Thunderbolt Iron may or may not be related: meteorite alloys are usually iron-based and can be cold-worked when no fuel is available to make steel. They are good in cold climates because they don't become brittle in cold as easily as carbon steels do (if they're one of those rarities among rarities that isn't brittle at all temperatures because of impurities).

Cold Iron may be a reason why Armor and Magic Don't Mix, as well as a form of Unobtainium in some cases.