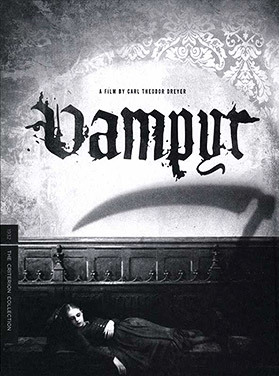 "She mustn't die... do you hear? She's dying, she's dying!"
— The Lord of the Manor
Advertisement:

Vampyr is a 1932 horror movie directed by Danish director Carl Theodor Dreyer. The film, a German-French coproduction, was first conceived shortly after Dreyer's previous (and arguably most famous) film, The Passion of Joan of Arc, and loosely based on Joseph Sheridan Le Fanu's collection of short stories In a Glass Darkly, most notably the stories Carmilla and The Room in the Dragon Volant. Dreyer's first film with synchronized sound, Vampyr nonetheless was produced much like his previous silent movies, with descriptive intertitles, limited dialogue, and all sound added during post-production. Most of the movie's cast were not professional actors: star and financier Nicolas de Gunzburg was a minor German/Russian (though he had been raised primarily in England and France) who adopted the stage name Julian West in an attempt to break into acting against his family's wishes, and Jan Hieronimko, who played the villainous village doctor, was discovered by Dreyer one night on the Paris Metro.

The story involves Allan Gray, a young student of the occult whose wanderings take him to the village of Courtempierre, France. He is contacted by a local manor lord, who begs him to ensure that his eldest daughter, Léone, not be allowed to die and leaves him with a mysterious package to be opened in the event of the lord's death. The next day, Allan explores a nearby abandoned castle before traveling to the lord's manor just in time to see the lord shot by an unknown assailant.

Allan, the manor's manservant, and the lord's youngest daughter, Giséle struggle to save the dying Léone. The village doctor arrives that night and explains that Léone is suffering from severe blood loss. Allan provides his blood for a transfusion, and falls asleep only to be awoken by the manservant. The two interrupt the doctor's attempt to poison Léone and give chase to the perpetrator. As Allan experiences a vision of his own burial, the manservant unearths the grave of long-dead Marguerite Chopin, whom he now believes to be the vampire responsible for Léone's condition.

Vampyr was not well received in its German premiere. When audiences in Vienna demanded their money back and were denied by the theater, a small riot broke out. Although Dreyer went back and made some minor edits before its subsequent French premiere, where it was somewhat better received, the overall press reaction was negative, and the film was a financial failure that led to Dreyer having a nervous breakdown and being institutionalized. Modern critics have been much more receptive to the film, with critics frequently citing it as one of the most effective horror movies of all time, and praising its expressionistic and surrealistic qualities.

Both the original German and French negatives were subsequently lost, and plans to produce an English language version of the film were halted following its poor reception. Most of the surviving copies of the film were of poor quality and/or heavily edited, until restoration efforts in the 1990s and 2000s sought to restore something closer to Dreyer's original vision.