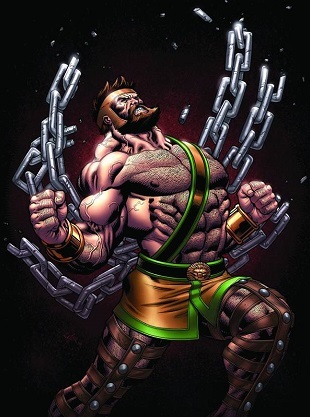 Hercules (by Marvel Comics) is a comic book character who first appeared in "Journey into Mystery Annual" #1 (1965), created by Stan Lee and Jack Kirby. At first Hercules was mainly used as a rival to The Mighty Thor, but he quickly became another well-established superhero. The majority of his appearances have featured Hercules as either part of an ensemble team (Such as The Avengers, the original Champions, The Defenders, and the Heroes for Hire) or partnered with some other hero as a Foil, most notably Thor and Amadeus Cho, but also Wolverine, Deadpool and Spider-Man.

Marvel's take on Hercules is that of a very rugged, boastful, and irresponsible Manly Man, usually with outdated morals - although, Depending on the Writer, he sometimes adapts much more quickly and happily to the modern world and its morals, to the point where it's a key point in Hercules (2015). His powers and personality allow him to easily be The Big Guy, The Wise Guy and The Lancer, and thus he's usually considered one of the Lighter and Softer Marvel characters.

Marvel has also published the character with a major role in a number of titles, such as:

HAVE AT THEE, TROPES! RECEIVE THE GIFT FROM THE PRINCE OF POWER!

This section covers stories from his first appearance until his defeat of Typhon and the end of his exile from Olympus.

Tropes gathered from Herc's sporadic appearances between his return to Olympus and the "Dark Age" incarnation of the Avengers starting from issue #355.

This section covers Herc's disparate appearances between Heroes Return up to the start of World War Hulk.

Tropes from the Pak/Van Lente run of Hercules, starting with World War Hulk up until Hercules (2015).

Now come, Tropers. Let us partake of wine, song, and the company of fair maidens (or men, if preferred)!