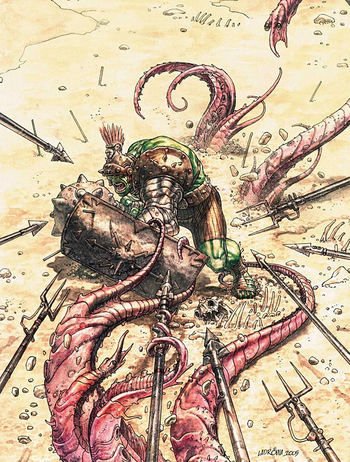 The storyline centers on the Hulk, naturally. After a fight between The Hulk and The Thing leaves Las Vegas in ruins and kills two dozen people (later retconned), members of the Illuminati—specifically Tony Stark, Reed Richards, Doctor Strange, and Black Bolt—decided that The Hulk was too dangerous to leave on Earth. Their solution: Send Hulk to a peaceful planet with no intelligent life so he could not hurt anyone, finally granting the green behemoth his wish of being left alone.

Of course, everything goes horribly wrong. The Hulk, who is understandably upset at this turn of events, damages his spaceship; this sends it off-course and into a wormhole. The ship crash lands on the alien planet Sakaar, which is very full of intelligent life—none of which is friendly. Weakened by his trip through the "Great Portal" (as the locals call it), The Hulk is implanted with an obedience disk that forces him to obey commands, then sent to an arena to fight for his freedom.

This storyline is very popular amongst Hulk fans, in part because it gives the not-so-jolly green giant some actual character development for the first time in years. (Stories prior to this one focused on either Bruce Banner or Banner in The Hulk's body.)

Planet Hulk was later adapted into an animated film with the same title; it changed and condensed several aspects of the story (and removed a few characters completely). Despite the changes, it is still considered one of the better Marvel animated films. It is also one of the more violent Marvel movies, thanks to visible displays of blood and a few graphic deaths.

The ending of Planet Hulk led directly into the World War Hulk storyline. Secret Wars (2015) features a Planet Hulk mini-series in which Steve Rogers and Devil Dinosaur journey into Greenland, a region of Battleworld populated by Hulks.

Parts of the Planet Hulk storyline were adapted in the Marvel Cinematic Universe movie Thor: Ragnarok.

The story is revisited for the Marvel Legacy era in "Return to Planet Hulk" as part of the title rebranding of Amadeus Cho's Totally Awesome Hulk back into The Incredible Hulk as Amadeus is brought to Sakaar unknowingly by those seeking the Worldbreaker.