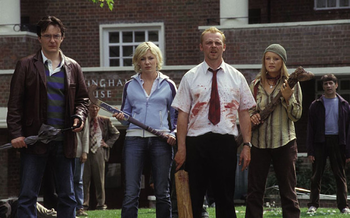 "Shaun! How are you doing?" "Surviving."
"Some are born great, some achieve greatness, and some have greatness thrust upon 'em."
— Malvolio, Twelfth Night
Advertisement:

The Action Survivor is an Innocent Bystander in dangerous circumstances. They won't so much get The Call as be pinned by a telephone pole, thus trapping them in an adventure that a more qualified Action Hero would have trouble sorting out.

The Action Survivor is the opposite of the Action Hero; They're pretty normal in just about every way. If the Action Hero is ostensibly a fantasy idealized self, the Action Survivor is more of a self-insertion for the viewer, someone the audience can easily relate to. However, Wish-Fulfillment figures into this character's development. While outrunning shadowy evildoers and keeping the MacGuffin out of reach, they'll discover they're far more cunning, resourceful and resilient than they gave themselves credit for. They'll likely learn more along the way.

Some movies will even give the protagonist a power upgrade via ancient prophecy/the one-ness, etc. Most films forgo this for Badass Normal. If the character gains superpowers this way, expect them to have to go from Super Loser to competent.

Note that they're not just good at "merely" surviving the adventure like a mangled heap of bones, but is quite capable of surviving mostly unharmed while somehow managing to delay or disrupt the Evil Plan enough to foil the bad guy. In fact, said villain will likely be blindsided by their involvement because they planned for everything except this Spanner in the Works.

One trait of these types is that they're uncommonly decent. They'll often get at least one chance to walk away (often given "in good faith" by the villain), but choose to keep fighting rather than run away because of altruism, love, upbringing, a sense of duty or they're bored with their small lives and choose to keep adventuring for the fun of it.

The Action Survivor is common not only in action movies but also horror movies and video games, where an unprofessional protagonist adds to the desperate horror feel.

By the adventure's end you can expect them to be incredibly happy to have things go back to normal, although their growth throughout the adventure means they'll be standing up to his Pointy-Haired Boss, dump their harpy girlfriend for their One True Love, or not go back to their normal life.

Related to the Final Girl — a specifically female, horror movie version. The Right Man in the Wrong Place is often this type of hero. On the Super Weight scale, they're primarily Muggle Weight, sometimes making the jump to Iron Weight upon taking a level in badass. See also Action Duo. Also compare Unfazed Everyman, Invincible Incompetent.