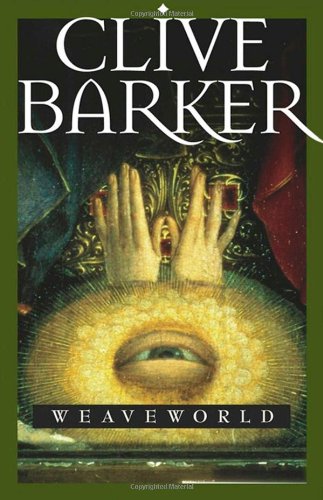 Weaveworld is a story about a carpet which contains a world. This carpet, called the Fugue, is the refuge of the Seerkind, a Mage Species that was was nearly wiped out in the late 19th century by an unstoppable force known to them as the Scourge. In desperation, they used thier magic to weave themselves and their places of power into a tapestry in order to elude the Scourge. They left the Fugue in the hands of sympathetic human Custodians to protect it until the world is safe for the Seerkind again.

But now it is the 1980s, and the last of the Custodians is on her deathbed.

Enemies of the Fugue have nearly located it - the exiled Seerkind witch Immacolata and her undead sisters the Magdalene and the Hag want to destroy the Fugue, and they enlist a human accomplice, Shadwell the Salesman, to aid them. Called to the Fugue's defence is Suzanna Parrish, the granddaughter of the last Custodian, even though she is entirely ignorant of magic and the Seerkind. But the first to find the Fugue is ordinary young professional Calhoun Mooney, who sees in it the Wonderland he's dreamed of since childhood. At that point, a story full of wonders and terrors begins...

Clive Barker's second full-length novel, and his first novel that could more easily be classified as Urban Fantasy than Horror. The story was adapted as a graphic novel under the Epic Comics label in 1991. There has been a slow trickle of news about potential screen adaptations for decades, but as yet nothing has progressed beyond the planning stage.