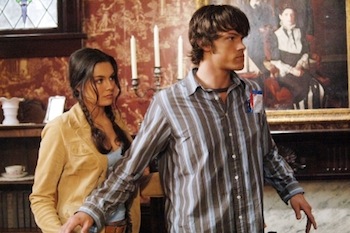 What kind of house doesn't have salt? Low-sodium freaks.
Sam: So, what are we today, Dean? Are we rock stars? Are we Army Rangers?
Dean: Reality TV scouts looking for people with...special skills.

, after purchasing a painting of a family who died violently. Dean and Sam investigate, with the help of Sarah, an antiques dealer's daughter.

Sam and Dean visit an auction house to get more information on the possessions owned by Mark and Anne Telesca who died in a locked house. Dean thinks the daughter of the owner of the auction house, Sarah Blake, is interested in Sam and encourages Sam to ask her out. Sam takes Sarah out for dinner, and she provides him with the provenance of the Telesca's possessions. A painting of the Merchant family has been passed from owner to owner after they are mysteriously killed. Sam and Dean sneak into the auction house and burn the painting, but the painting reforms and is sold to a new owner the next day.

Sam and Dean research the Merchant family and find the father, Isaiah Merchant, was suspected of slitting the throats of his wife, two sons, and adopted daughter before killing himself. When the Winchesters arrive at the home of the painting's new owner, she is dead, and Sarah Blake is there. The Winchesters explain what is happening to Sarah, who wants to help them. They find that the painting in the painting has changed from what it was originally—now it shows the Merchant family's mausoleum. They find the mausoleum and discover that Isaiah's body wasn't cremated with the rest. Dean looks up the death certificates for the family to find what happened to his body. They go to the cemetery and salt and burn Isaiah Merchant's remains, and then return to the home to burn the painting. Sam and Sarah are locked in the house with the spirit of Melanie Merchant, the adopted daughter who was the true murderer. Sarah realizes that even though Melanie's body was cremated, some of her hair was likely used on the antique doll in the family's mausoleum they had seen when they visited the cemetery. Dean returns to the mausoleum while Sam and Sarah fight Melanie's spirit. Dean manages to burn the doll and Melanie is consumed in flame.

It turns out that the reason Melanie was adopted was that everyone else in her original family was found murdered in their beds. Sarah makes sure the painting is burned. Sam gives Sarah a kiss before leaving, but says he can't be with anyone because it would put the person in danger.

For this episode = 2 ghosts and 3 humans.