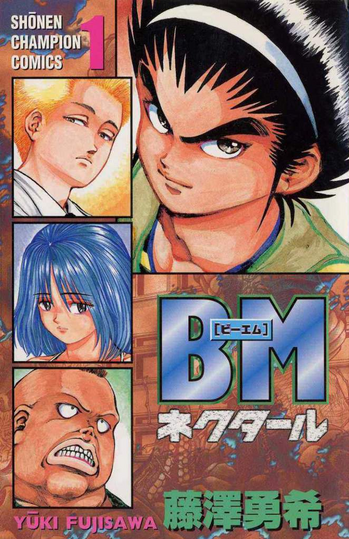 Bio-Meat: Nectar is an action Horror manga by Fujisawa Yuki. It takes place in Japan 20 Minutes into the Future, where a world food shortage and growing landfill problem plague humanity. Researchers in Japan, through the magic of genetic engineering, create Bio-Meat, or B-M for short. They are genetically-modified creatures that are organically plump, very easy to breed, and provide a viable food source for the whole world. In addition, they will eat anything, even materials like plastic and vinyl, but not inorganic compounds like glass, fiberglass, or metal.
Advertisement:

The main character is Maaya Kan, an elementary school student who has recently moved from Osaka to Tokyo, and is having trouble adjusting due to his violent personality and strange sense of humor. The area he lives in is right outside the B-M processing facility, and when a large earthquake strikes them, there is a containment breach and all the little suckers break out and run amok in the town.

Did we mention they eat anything?

Now Kan and his fellow classmates have to try and survive the onslaught of B-M, as well as the government's little efforts to cover it up. Despite being a shounen series, the sheer amount of fatalities and gore are rather astounding. Runs for 12 volumes.