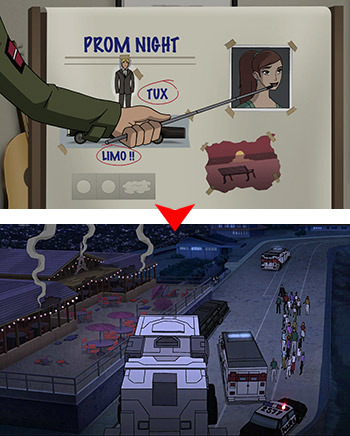 A Sitcom plot where the characters are trying to pull off some kind of easy, straightforward operation: throw a surprise party, open a restaurant, or pick someone up at the airport. Either a series of things go wrong; they screw up through their own natural laziness, cheapness, or stubbornness; or one solitary thing goes awry and The Plan falls to pieces. Epic Fail is inevitable.

Once things have disintegrated, the characters go to ludicrous extremes to fix them, and a "Fawlty Towers" Plot or Indy Ploy evolves.

A phrase often invoked in the formulation of these plans is: "What's the worst that could happen?" or "What Could Possibly Go Wrong?" — which, if you are familiar at all with the concepts of Finagle's Law or Tempting Fate, is a sure sign that things are going to go wrong in the worst way, often with a Gilligan Cut to the protagonists running from angry bikers or such.

Contrast with Zany Scheme. When the end goal goes through despite this trope, you have Despite the Plan. When the character expected circumstances to arise and improvised about them, he's playing Xanatos Speed Chess. When the character scraps the initial plan and goes with a new one, the character has decided it's Time for Plan B. When they think the initial plan is the only plan they need, only to find they need to come up with a new plan on the fly, that's Plan B Resolution. Plethora of Mistakes is this trope applied to crime thriller fiction, and involves everything going wrong for the sake of going wrong in order to teach the Aesop that crime doesn't pay. A plan revealed to the audience tends to fail miserably due to the Unspoken Plan Guarantee.

In more serious stories, anything described before the fact as an "in-and-out" operation is almost certain to fall into this trope.

Nope. She clearly didn't think this one through.

Nope. She clearly didn't think this one through.