Series / 100 Things to Do Before High School 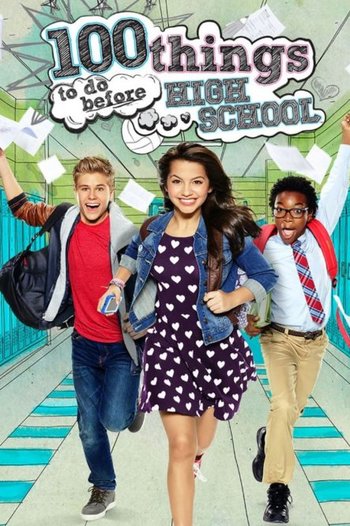 A Nickelodeon middle school sitcom about three middle school teens; CJ Martin, Christian "Crispo" Powers, and Fenwick Frazier. They try to think of things to do to make middle school easier because, as CJ's brother told her, high school will be harder and friendships will fall due to all of the pressures.This show began as a TV movie in 2014, which then was turned into a sitcom with pretty much the same cast, though the principal, who was the main antagonist in the movie, is pretty much absent.

Pretty much the Distaff Counterpart to fellow Nickelodeon sitcom Ned's Declassified School Survival Guide, right down to both having the same creator/director, Scott Fellows.

On November 25, 2016, it was announced the show had been canceled and not renewed for a second season.