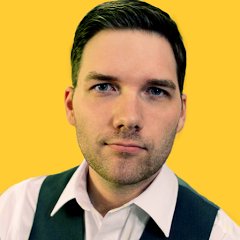 (born April 15, 1988) is an American filmmaker, YouTuber and film critic. He is known as one of the most popular figures of YouTube's film community, though he does have his fair share of other content related to topics including video games and anime. His YouTube channel reached one million subscribers on June 20, 2017, and two million on July 26, 2022.
Advertisement:

Stuckmann first got into film criticism in his teenage years, but has been a lover of film his entire life. He has cited Roger Ebert as his chief influence for pursuing the former, and credits the experience of watching Signs in theaters as a teenager for igniting his passion for filmmaking. In his twenties, he unearthed the community of film critics on YouTube, and the rest is history.

While Stuckmann had been writing and directing shorts and features with friends and family as early as his adolescence — including a series of Indiana Jones fan films with none other than himself as Indy — he began a more public filmmaking career in the late 2010s (barring an unfinished short in 2013). As of now, he has released two short films: the horror-comedy Auditorium 6 (2017) and the comedy-drama Notes from Melanie (2019). While the former has only been shown at film festivals, the latter was released on his channel for free public viewing

In July 2021, it was announced that Stuckmann had signed with production company Paper Street Pictures to write and direct his debut feature film, a horror film titled Shelby Oaks based on the Paranormal Paranoids, a fictional mid-2000s U.S. paranormal investigative team. The film was slated to enter production in 2021, but as Stuckmann explained in February 2022

, plans were postponed as a result of the since-averted IATSE strike. A Kickstarter campaign

started in March of that year to secure additional budgeting ultimately raised a historic $1,390,845 — over a million dollars more than its initial $250,000 goal. The film was shot in 28 days between May and June 2022 and is currently in post-production, slated for release in July 2023.

Stuckmann also announced in July 2021 that he would be retiring regular movie reviews with graded scores, instead shifting towards giving unscored reviews for movies he wants to draw attention and support to, as well as videos tailored toward people seeking information on making films. However, he eventually began giving unscored reviews of new releases as well.

Stuckmann is also both an approved Rotten Tomatoes critic and member of the Critics Choice Association. In 2014, he was added to Channel Awesome, but parted ways with them in April 2018.

Chris and his channel provide examples of:

Thank you so much for watching, guys, and as always, if you liked this, you can click right here... and get Stuckmannized.