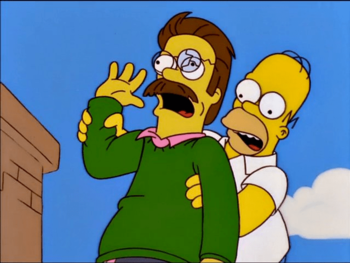 Homer (as Ned): Relax, I'm fine! But when I do die, I don't want any autopsies!
Larry Wilson: Lomax told whoever he was talking to not to kill us while he's around.
Richard Parker: Yes, but Bernie's dead. He's not around anymore.
Larry Wilson: Yeah. (Beat) I know that. (Beat) You know that. (shakes head) Nobody else knows that.
— Weekend at Bernie's
Advertisement:

It's always a sad affair when someone dies... unless you're in a comedy, of course. In comedies, there may be all sorts of unlikely reasons why it's really not convenient for someone to be dead. So rather than face reality in a mature, responsible fashion, why not launch a Zany Scheme where you pretend the corpse is still alive, or at least make sure nobody can check?

Cue all sorts of wacky hijinks: the corpse is dragged around, impersonated (either bodily or through ventriloquism), made to move by strings, zombified and stored away in the most unlikely places. This goes on until such time as it's convenient to reveal that the victim is really dead and that they died in circumstances that may or may not involve the protagonist (although the protagonist is usually the killer, whether on purpose or not), or when the corpse is accidentally discovered.

A common variation involves a man who is unconscious or under a deep sleep rather than dead. Usually used when either the "corpse" is an already established character or in a show that refuses to acknowledge death. In real life, people have been mistakenly killed for real this way, such as being buried alive, or if an autopsy is mistakenly performed on a living person.

A serious version of this is the El Cid Ploy. See also The "Fun" in "Funeral". Compare Mummies at the Dinner Table (which is about someone trying to convince themselves dead people are still alive) and Dead Pet Sketch. The opposite situation — usually played seriously — is Faking the Dead. Dead Person Impersonation is when a living person assumes the dead one's ID and doesn't bother with the body.

If someone has an audio recording instead of a corpse, they may employ Recorded Spliced Conversation in the same manner. This is common in mystery fiction.

It's All Too Shocking

Alternative Title(s): Of Corpse He Is Alive

It's All Too Shocking