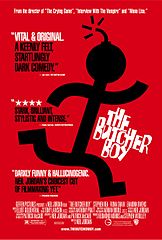 "When I was a young lad twenty or thirty or forty years ago I lived in a small town where they were all after me on account of what I done on Mrs Nugent"
Advertisement:

The Butcher Boy is a 1992 novel by Patrick McCabe. Set in a small town in Ireland in the early 1960s, it tells the story of Francie Brady, a delusional boy who retreats into a violent fantasy world as his troubled home life collapses.

The novel won the 1992 Irish Times Irish Literature Prize for Fiction and was short-listed for the 1992 Booker Prize.

A film adaptation was made in 1997, starring Eamonn Owens (as the title character), Stephen Rea and Fiona Shaw. Sinéad O'Connor cameos as the Virgin Mary.