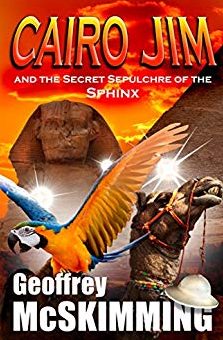 Cairo Jim is a series of children's novels by Geoffrey McSkimming starring the titular Captain Ersatz and Affectionate Parody of Indiana Jones. The Adventurer Archaeologist travels with Doris the Macaw, a bird with a gift for ancient languages and a fondness for Shakespeare, and Brenda the Wonder Camel around the world to locations such as Greece, Peru, Turkey and Crete, although they were based in Egypt.

The series contained roughly 20 books published between 1991 and 2007, and established a cast of many recurring characters, including Jim's "good friend" Jocelyn Osgood, who received a few books of her own; Gerald Perry Esquire, Jim's financier and founding member of the Old Relics Society, and the villainous Captain Neptune Flannelbottom Bone.

The books, in order: