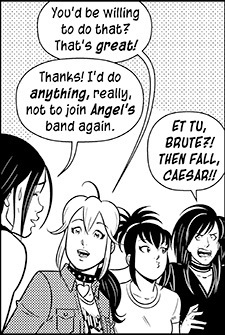 "We flatter those we scarcely know,
We please the fleeting guest,
And deal full many a thoughtless blow
To those who love us best"
— Ella Wheeler Wilcox
Advertisement:

Some heroes and heroines can take a huge amount of trouble and danger in their stride. Big Bad out to get them? Yesterday's news. Death Traps to the left and right of them? Snore. The End of the World as We Know It? They already know, thanks, and they're working on it. These characters know that a burden rests on their shoulders and don't let it get them down.

There's only one thing that can bring a seemingly invincible character to their knees: Betrayal.

Having the entire Evil Empire out to get them isn't a big deal as long as they have their True Companions watching their backs. But if one of the chosen few should renege, the hero will go to pieces.

It doesn't have to be anything as dramatic as switching sides or selling out to the Big Bad. If one makes a few scathing comments about their leadership skills, or another holds the hero responsible for his Cynicism Catalyst, the results can be as devastating as though they'd painted a target on their pal's head and handed out sniper rifles.

Can be Played for Laughs if their reaction is clearly an overreaction — surviving a cave-in, an ambush, and a death trap without breaking a sweat, only to burst out into tears when his girlfriend forgets his birthday, for example. Generally it's anything but funny; most people can relate to having someone important let them down. Even if it's an overreaction it may reveal exactly how much stress the character is under.

A second version of this trope is where the hero has already given their buddy a second chance, overlooking past (or even current) misdeeds in the interest of preserving the friendship and deciding to accept their pal just the way they are, warts and all... as long as their misdemeanors are confined to people who aren't the hero or their immediate family. Should that unspoken truce be broken, a massive Freak Out is only seconds away, followed by Post-Support Regret.

A third version of this trope comes when the hero or the villain develops a bond with someone, only to discover that the person in question was never his friend, and just pretended to be one. Often followed by the obvious next question, Was It All a Lie?

This is, of course, Truth in Television — the vast majority of us care far more about what our parents, friends, and family think than what Joe Bloggs down the street may say about us.

Particularly brutal if the victim is betrayed by the ones who supposedly rescued him from a Friendless Background, or if they desperately seek friendship above all else. A Sadistic Choice, Break His Heart to Save Him or Because You Can Cope excuse may be made if the victim's "betrayer" felt as though they had no choice but to abandon them. If the characters in question were friends with each other prior to the betrayal, it probably triggers Face–Heel Turn, Evil Former Friend, and We Used to Be Friends. Often overlaps with Insidious Rumor Mill. Compare and contrast Plot-Mandated Friendship Failure, where the friend merely leaves rather than outright betrays him. Betrayal by Offspring is similar except that the betrayal is done by a character's son or daughter.

The Trope Namer is Shakespeare's Julius Caesar, where Caesar reacts with shock at seeing Brutus among his murderers. note Other sources say that he said, "And you, child?" or said nothing and stopped resisting. "Et tu" means "and you?" or idiomatically "even you?"

With King Andrias revealing Marcy's secret, both Anne and Sasha are forced to confront the awful truth that their own best friend was responsible for trapping them in Amphibia in the first place.

With King Andrias revealing Marcy's secret, both Anne and Sasha are forced to confront the awful truth that their own best friend was responsible for trapping them in Amphibia in the first place.