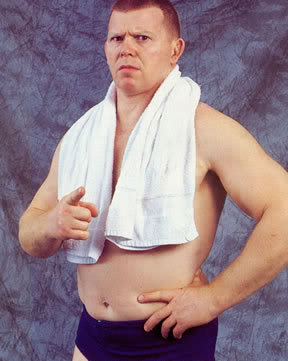 , and holds the record for second longest individual possession of the title.

A Ring Oldie who has been wrestling since 1973, bouncing around various leagues, including the AWA and NWA, Backlund joined the then-WWWF in 1977. Playing the part of a clean-cut Face with impressive technical ability, Backlund quickly got over with wrestling fans, and would win the WWF Championship from "Superstar" Billy Graham in 1978. Backlund would remain champion for the next five years (though would semi-officially lose and quickly regain the belt to Antonio Inoki during a Japanese tour, and, in 1981, an angle was played where Greg Valentine, after losing by pinfall, would be "accidentally" given the belt by a kayfabe "dazed" referee. The title was supposedly "held-up" until the next month when Backlund easily won the rematch). While Backlund would defend his championship against a veritable who's who of the early 1980s wrestling scene, eventually fans grew tired of the squeaky-clean Backlund's domination, especially with the more muscular and charismatic Hulk Hogan waiting in the wings.

The natural angle at this point would be for Backlund to make a Face–Heel Turn leading up to a confrontation with Hogan. However, Backlund refused to change his character and so would end up losing the belt to a transitional champion Foreign Wrestling Heel The Iron Sheik in 1983. (Sheik would drop the belt to Hogan one month later.) Backlund would bounce around the mid-card before entering a semi-retirement in 1984.

Backlund returned to the WWF in 1992, and although at first he was the same face character as before (but now trying to mentor younger stars), he would eventually portray a gimmick that crossed his current credentials with a Crazy Old Man tendency to "snap" without provocation. Feuding with WWF Bret Hart in 1994, Backlund would defeat him in a Throw In The Towel match at that year's Survivor Series, thus beginning a second official reign of championship. Three days later, Diesel would win the title from him in a Squash Match in an oddly non-televised show.

Since then, Backlund has made sporadic appearances on WWE programming and pay-per-view events (most notably as a Joke Character entry in the 2000 Royal Rumble), and made a brief run in TNA during 2007. He also showed up on WWE again in 2012 in the lead-up to the 1000th episode of RAW when a furious and humiliated Heath Slater, fresh off a loss to Sin Cara, challenged any former champion in the back to throw down with him and Bob answered the call, submitting Slater with his treadmark Finishing Move.

Backlund is also known for a failed attempt in 2000 to run for a Connecticut representative seat in Congress, and for guest-starring in a Memetic Mutation worthy episode of Singled Out

"The tropes of MISTER Bob Backlund have come TO SAVE YOU plebeians. BUT FIRST, TO SCRUTINIZE YOU... PASTORIZE YOU TO THE FULLEST... AND SYNCHRONIZE YOU... BACK INTO MORALITY!":

"... these tropes didn't change, YOU CHANGED! And now you have been educated I want you to make MISTER Backlund GREAT AGAIN!"