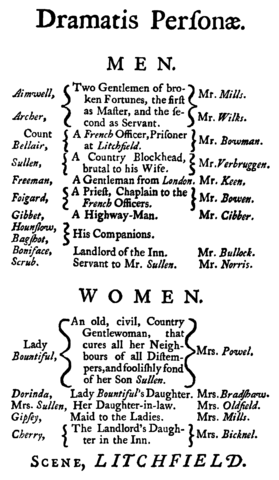 'Cause it's a complicated Russian novel
Everyone's got nine different names
So look it up in your program
We'd appreciate it, thanks a lot...
— Company, Natasha, Pierre, and the Great Comet of 1812, "Prologue"
Advertisement:

From Latin, "the persons of the drama." A list of characters at the beginning or at the end of a work of fiction.

This stemmed from the necessity of casting a play, and has somehow drifted into fiction from there; the end credits roll of a movie or TV show evolved from this practice too. Usually lists them by name with a short description, most often relaying who is related to whom. In works which fit into a large continuity with a large number of characters (such as comic books), this helps the reader keep up with the characters involved in the work.

A Dramatis Personae is quite often written in a slightly olde-world style, evoking the Shakespearean style of writing. Sometimes this is done separately at the beginning of each chapter as part of In Which a Trope Is Described.

If the characters are not strictly listed alongside which actors are playing them in a live drama, expect identity-based shenanigans.

Compare with Boss Subtitles, which is a variation of this trope often used to introduce videogame bosses.