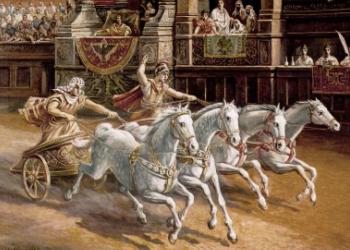 Two horsepower is all they needed back then.
Advertisement:

Media set in Ancient Rome will feature gladiator games or chariot racing. If it's the race, expect it to be based on the one in Ben-Hur. Expect the enemy to cheat, play rough, have illegal modifications, etc.

In real life, such antics would have got a charioteer lynched. People rioted over their favorite teams, most famously the Nika riots of 532 in Constantinople. There were four (later six) traditional teams named after colors; in the Byzantine Empire the two major factions were the Greens and Blues, and while your loyalty to the Emperor might shift, your loyalty to your chariot team was set for life. Hell, loyalty to a chariot team was, on more than one occasion, the reason for an Emperor's fall.