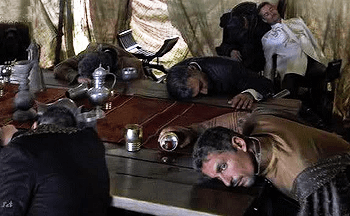 Needless to say, his "life of the party" reputation took a huge hit.
"Explain to me why it is more noble to kill ten thousand men in battle than a dozen at dinner."
— Tywin Lannister, A Song of Ice and Fire
Advertisement:

A person or group of people are invited to a social gathering — a party, banquet, or any other form of get-together. However, it's just an excuse to get them all together and kill them.

An Old, Dark House is an ideal place to pull this off.

In Real Life, this is literally one of The Oldest Tricks in the Book — it's been played countless times since the beginning of history. It has also always been considered as an especially ruthless and evil thing to do, as it is the ultimate violation of Sacred Hospitality — transgressing against the latter is frowned upon even by warlike cultures and usually but not always crosses the Moral Event Horizon. It is much more acceptable when the invited ones are all guilty of horrific crimes and do not even know who the host is, as there is not even the matter of betrayed trust at hand. It's a classic nevertheless, because, after all, it is also very effective and convenient.

A subtrope of Lured into a Trap and often of the Decapitation Strike. Compare Reunion Revenge, A Fête Worse Than Death, Widowed at the Wedding, Board to Death and Ten Little Murder Victims.

Nothing to do with the Conservative Party of Great Britain, occasionally known as "the nasty party" by its critics. Also not to be confused with a Shoddy Shindig, where the party merely sucks, but there is nothing murderous about it.

As this trope involves death and betrayal, all spoilers on this page are unmarked.